Who Has Power in the PR Industry?

Posted by Laurel Miltner on September 9, 2010

In July, PR Week published its annual PR Power List, recognizing the public relations and corporate communications professionals its staff deems the 25 most powerful in the industry. These are “people who make things happen, demonstrate vitality and enthusiasm for what they do, and have an influence beyond their circle.” 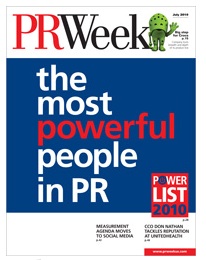 In 2008, we were a bit surprised that none of the Power List influentials were on Twitter. Two years later, now that Twitter has reached mainstream success, we decided to take another look.*

In the end, we found only two members of the PR Power List that have Twitter accounts and use them effectively — meaning that they share interesting, relevant information and engage with their followers.

I’m not trying to argue about the validity of the PR Power List. Clearly, these people are quite powerful. They help run million- and billion- dollar businesses, and make decisions that affect thousands of employees and consumers. And, I’m sure they are very busy folks — arguably, too busy for social media.

The Influence of Social Media on PR

That being said, social media is becoming an essential part of strategic public relations, and it’s likely this trend will only continue in the future.

If the leaders of our industry are not listening to their peers, consumers, employees and other influencers — and sharing their vision with those who are actively shaping the future of the business — how much longer can they stay relevant?

Currently, there are more than 4,000 Twitter users that have tagged themselves on WeFollow.com with “PublicRelations,” and more than 3,500 tagged with “PR.” Top PR tweeters such as Steve Rubel, Kevin Dugan, Deirdre Breakenridge, Sarah Evans, and Brian Solis have thousands of followers, and are sharing information and engaging with followers daily.

As an integral part of their career and professional growth, these people — and many others in the industry — are:

In many ways, these people are shaping the future of public relations. And, the industry’s 25 most powerful are largely absent from these discussions.

What do you think it means to be powerful in business today? Does it matter if executives are present in social media? You be the judge: Who really has the power in the PR industry?

I’d love to hear your thoughts on this. Please leave them in the comments below.

Laurel Miltner is a consultant at PR 20/20, a Cleveland-based inbound marketing agency and PR firm. Follow Laurel on Twitter @laurelmackenzie, or connect on Facebook at Facebook.com/laurelmiltner.

*In July and August 2010, we conducted name searches on Google, Twitter, LinkedIn and Facebook of the winners. If you think we missed you, please let us know below in the comments or connect with us on Twitter @pr2020.