What’s the Future of Storytelling? 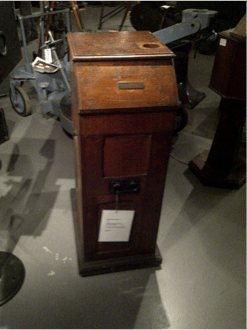 In a Manhattan parlor, 500 people lined up, quarters in hand, to peek inside Thomas Edison’s moving picture machine, the Kinetoscope. It was April 1894—and the event marked the opening of the first commercial motion picture house. What followed was a media evolution unlike any seen before.

But according to Geoffrey Long (@geoffreylong) of the USC Annenberg Innovation Lab, we are on the brink of another truly transformational period in media, one that will rival the Kinetoscope’s release.

In his SXSW session, Storytelling with the New Screens, Long and his colleagues Alisa Katz (@alisakatz) and Francesca Marie Smith (@francescamariesmith) detailed how technological advances, like ocular wearables, smart watches, connected cities and 3D printers, will lead to unprecedented change in the way we tell stories.

During the session, they outlined three new forms of storytelling: tangible, augmented and wearable, and virtual reality and 360-degree. Read on for details on each.

Tangible storytelling is when the story is paired with something that can be physically touched, thereby better connecting the individual to a particular character, object or location. Some examples of this in action include:

Wearables provide the unique opportunity to customize stories based on the individual, giving them hyper-personalized experiences. How might this work in action?

As such, wearables present immense opportunities to personalize media by pushing specific experiences to users.

What if your home becomes a storytelling platform? This is exactly what happened when USC Annenberg researchers wrote and produced The Lighthouse in the Woods, a ghost story that draws on the 360-degree immersion of the Occulus Rift.

In addition to virtual reality, the story used the screens around the viewer, as well as those in front of them, to add drama. Digital picture frames lit up as the narrator spoke of different family members and then dimmed when a door was slammed.

The experiment demonstrated how connected homes could eventually allow the environment around a person to become a part of the story.

As smart and connected devices become more mainstream, it’s inevitable that the way people consume media will evolve. How will these changes affect content marketers? Share your thoughts in the comments below.

Tracy Lewis is the director of talent and a senior consultant at PR 20/20. She is also the community manager for Marketing Agency Insider. She joined the agency in March 2009 after graduating from Ohio University. Full bio.

9 Techs to Take Your Content to the Next Level

How to Use Contextual Marketing for a Better Website UX